TRICK: EYESHADOW TO FILL IN AN UNEVEN HAIRLINE 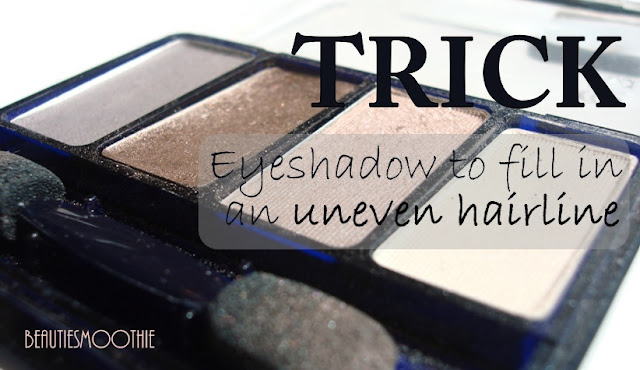 Uneven, thinning or receding hairlines are not only men's problems, women can get them too and they can sometimes lead to self esteem issues. When I say uneven hairline, I mean a hairline that appears to be thinner in some places than others. This is often caused by lighter and blonder hairs close to or in the hairline. Especially when the rest of your hair is dark it might seem as if you're hair is thinning overall.

The easy solution for this problem is to get bangs, your problem will be invisible immediately. Bangs come in al shapes and forms, from side swept to full on straight cut or short pixie bangs. They can be a nice change and will lead to a total makeover in just one salon visit.


If you're really not a fan of a banged hairstyle or you have bangs but want to wear a tight slicked back ponytail once in a while, then I have another trick for you to disguise an uneven hairline.

This little trick was recently revealed by Khloe Kardashians' stylist Jen Atkin. He told Cosmopolitan he often uses eyeshadow along the hairline in the same color as his client's hair, to shade the scalp. It will make the hair appear thicker and is especially useful when you are attending a party or event where there will be taken pictures. The eyeshadow offsets the highlight on your scalp that the flash brings on, which can make your hair look thinning.

All you need is an eyeshadow brush and eyeshadow in the same color as your hair (not shimmery). Fill in the thinning hairline and make sure to blend very well. That's it!

It's a very easy trick, but probably not a realistic one on a daily basis, I can already imagine going to the gym with a filled in hairline and have brown sweat dripping from my head..  But it is definitely a great tip to try out for a night out or a party.

Hope you enjoyed this post and thanks for reading!